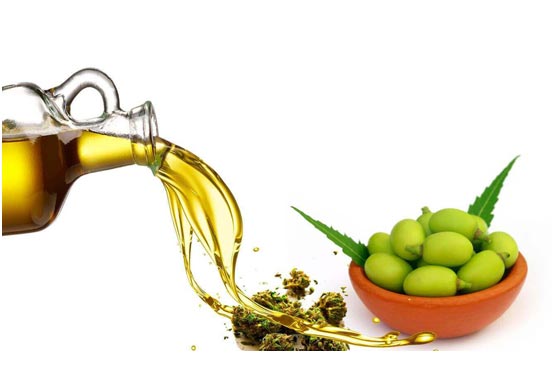 In agriculture, neem oil, fruit and the different by products such as seed cake are used as biopesticides, fungicides and organic manures. Scientists foresee that neem tree will create a new era in the pest control and thereby solve other ecological problems affecting the globe. Recently, a number of agro-chemical businesses have realized the potential of neem and there has been a growing interest towards neem as an organic alternative to industrial pesticides.

The importance of neem as bio-pesticide was realized by the modern scientific community, as early as 1959, when a German scientist in Sudan found that neem was the only tree that remained green during a desert locust plague. Literatures confirm that neem can effectively get rid of over 200 pest species that affects plants. The pesticidal characteristics of neem is largely attributable to Azadirachtin found in the neem extracts which is a growth regulator and as well as a powerful feeding and ovipositional deterrent. Azadirachtin is non-volatile and an insect cannot prevent it by smell but has to taste it, in order to respond to it. A taste of azadirachtin stimulates at least one 'deterrent neuron' in insects which show an anti-feedant response. The strength of 'deterrent neuron' responses has been correlated with the strength of anti-feedant responses. Neem oil can also suffocate mites, whiteflies, aphids and other types of soft bodied insects on contact. So it is clear that neem does not kill on contact, rather it inhibits feeding and reproduction of the pests. These multiple modes of action make it unlikely that insects and plant pathogens can develop resistance to neem. Also certain pest such as floral thrips, diamond back moth and several leaf miners which develop resistance to the inorganic pesticides or that are inherently difficult to control with conventional pesticides are effectively controlled or managed with neem.

The Emulsifiable Concentrate (EC) of neem

The emulsifiable concentrate (EC) of Neem prepared mostly from the Neem oil is used as the pesticide of choice in organic agriculture. It belongs to the category of medium to broad spectrum pesticides. Among the other known botanical pesticides such as Rotenone and Pyrethrins, neem is found to be superior due to a number of reasons. It is also compatible with a list of other synthetic pesticides, which enables its usage as a component of Integration pest management (IPM). Below are the reasons to explain why neem seems to be best and non-replacable component of IPM

How Neem works as a pesticide

As an insect growth regulator:

It is a very interesting property of neem products and unique in nature, since it works on juvenile hormone. The insect larva feeds when it grows and it sheds the old skin and again starts growing. This particular shedding of old skin is the phenomenon of ecdysis or moulting is governed by an enzyme ecdysone. When the neem components, especially Azadirachtin enter into the body of larvae, the activity of ecdysone is suppressed and the larva fails to moult, remains in the larval stage and ultimately dies. If the concentration of Azadirachtin is not sufficient, the larva manages to enter the pupal stage but dies at this stage and if the concentration is still less the adult emerging from the pupa is 100 % malformed, absolutely sterile without any capacity for reproduction.

As a feeding deterrent:

The most important property of neem is feeding deterrence. When an insect larva sits on the leaf, the larva is hungry and it wants to feed on the leaf. This particular trigger of feeding is given through the maxillary glands give a trigger, peristalsis in the alimentary canal is speeded up, the larva feels hungry and its starts feeding on the surface of the leaf. When the leaf is treated with neem product, because of the presence of Azadirachtin, Salanin and Melandriol there is an anti – peristaltic wave in the alimentary canal and this produces something similar to vomiting sensation in the insect. Because of this sensation the insect does not feed on the neem treated surface. Its ability to swallow is also blocked.

Another way in which neem reduces pests is not by allowing the female to deposits eggs. This property is known as Ovipositional deterrence, and comes in very handy when the seeds in storage are coated with neem Kernel powder and neem oil. The seeds or grains obtained from the market are already infested with some insects. Even these grains could be treated with neem seed kernel extract or neem oil; after this treatment the insects will not feed on them. There will be no further damage to the already damaged grains and at the same time when the female comes to the egg laying period of its life cycle, egg laying is prevented.

Mode of applications of Neem pesticide:

The mode of applications, the dosages and the points to be noted during application are explained in detail in the product section of this website. However the EC formulations are mostly applied as aerial sprays. It is also applied as soil drench to some plant species which translocates it through the plant tissue. Neem can be effectively used in Hydroponics, Aeroponics, greenhouses, shade houses, ornamentals, interior-scapes, horticulture, landscapes, nurseries, turf farms, shrubs, flowering shrubs, fruits and nut trees.

As a fungicide, neem oil is mainly used as a preventative and when disease is just starting to show. It coats the leaf surface which in turn prevents the germination of the fungal spores. Neem oil is effective against rots, mildews, rusts, scab, leaf spot and blights.

Neem Cake, the by-product obtained in the process of cold pressing of Neem fruits and kernels is used as organic manure. It has adequate quantity of NPK in organic form for plant growth. Neem cake typically contains about 6% neem oil and min. 4% nitrogen, 0.5 % phosphorus and 0.5% potassium. Being totally botanical product it contains 100% natural NPK content and other essential micro nutrients. It is rich in both sulphur compounds and bitter limonoids. Please report to the product section of this website, to find in details the nutrients present in neem seed cake. According to research calculations, neem cake seems to make soil more fertile due to an ingredient that blocks soil bacteria from converting nitrogenous compounds into nitrogen gas. It is a nitrification inhibitor and prolongs the availability of nitrogen to both short duration and long duration crops. It also acts as a natural fertilizer with pesticidal properties. Neem cake organic manure protects plant roots from nematodes, soil grubs and white ants probably due to its content of the residual limonoids. Neem cake is widely used in India to fertilize paddy, cotton and sugarcane. It is harmless to earthworms - in fact earthworm populations are known to proliferate in plots treated with neem cake.

Please Note, the information published in this website has been compiled from different sources and places (such as - various agriculture universities, government agricultural offices, various agriculture based websites, farmers and others) which can be changed according to person, place, situation and management practices, this information has been given for information only. We request the readers that, using their discretion, you can take discretion in this regard; your decision will be purely based on your own discretion in which our organization will not make any interference.